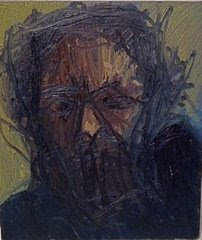 There's now just a few days left to visit the See Gallery and catch the Dave Pearson exhibition. It's been changed around as things have been sold since the opening, so even if you saw it early on it's worth another visit. On Friday it closes. The experience of the exhibition has been a very good one, and in the past few days I've been able to meet, at the See, several people from arts organisations and galleries who may well prove valuable contacts in the future.
We've sold a good number of pieces, and I'll reckon up with Julian and Jackie this week. The result will be to improve the bank balance for the Dave Pearson Trust - not before time since the business tax on the studio now needs to be paid. A bigger decision will also have to be made soon about the future of the building. We've had a surveyor checking the property over and the result suggests that although the building is structurally sound there are plenty of problems that need remedial work before it can be put into use as storage for the artwork. I can raise money to purchase the building but a price needs to be agreed with Chris Pearson who owns it. Inevitably there's a gap between the estimated value quoted by our surveyor in his report and that suggested to Chris by the estate agents. This needs to be resolved, and I expect we'll meet soon to discuss the issue.
Whatever the outcome the artwork will have to be moved to other storage place whilst repairs are made to the studio. The Trust will have to pay for this and storage doesn't come cheap, so we'll need to build up our financial reserves while we can.
Posted by Bob Frith at 10:59 No comments: Links to this post 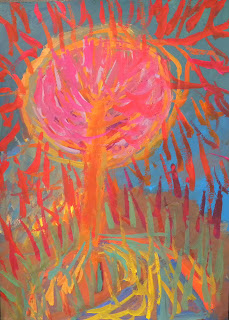 With the exhibition of Dave Pearson's work at the See Gallery having less than two weeks left to run it's a good time to take stock and see what we've achieved in managing the estate since his death in July last year.

We've formed The Dave Pearson Trust. This involved Chris Pearson handing over control of the artwork to the Trust; and the three trustees are myself, Chris and Margaret Mytton. Any decisions about the work are now made by unanimous agreement of the trustees. The process cost us just over £500 in legal fees.

The Trust now has a bank account. The Cooperative Bank accepted us as a Community Direct client; a business account with access to on-line banking. The process took about a month from filling in the forms to receiving all the paying-in and cheque books. The Coop has been extremely good to deal with - helpful and efficient. We have raised over £8,000 from exhibitions and the auction (see below), and this has enabled us to pay for immediate costs such as legal fees and the website.

We always knew that this will be a long and on-going process. Dave received a major obituary in 'The Guardian', and his colleagues and friends have been enthusiastic in helping us promote his work. We held an auction of work for friends of Dave to buy something relatively cheaply, and also raise money for the Trust. Meeting Julian and Jackie from the See Gallery has been a particular stroke of good fortune, and they have worked with us not only to show a selection of Dave's work, but also to raise awareness of his legacy by inviting others to see a small part of the work in the context of an exhibition. We are hopeful that his process may lead to further showings of the work.

Margaret is writing a monograph on Dave's work and life, which we expect to publish on its completion. We have also started a website, and by cataloguing the work we are creating a database and putting things in order, and by doing this we will be better placed to handle future developments. This, I stress, is going to be a long process - of the 15,000 or so pieces left by Dave just 500 have, so far, been entered into the catalogue.

This is now our biggest single problem. We've already thrown away well over three large skips full of rubbish, but the studio is in a bad state, with dry rot being the most immediate of many issues. We've removed the work from the source of the rot but now need to deal with it urgently. Some of the work is at the house, which is a 100 yards away from the studio, but storage needs to be found for the remainder (6 rooms worth) while building work goes on at the studio. The future of the studio itself is an issue and we are considering whether it can be sold to raise money for Chris, and if so what alternative storage options are there?

We've achieved a lot in 8 months, but there's a lot - an awful lot - still to be done. The process has been interesting, to say the least, and its brought me back in contact with many people I hadn't seen for many years, notably Florence Pearson, as well as finding new friends who are helping us on our way. In all of this the goodwill and enthusiasm shown by everyone for Dave's work has been consistent and heartfelt and helped us overcome any doubts we may have harboured.

Posted by Bob Frith at 08:36 No comments: Links to this post 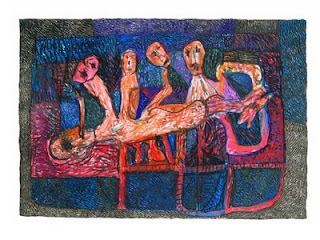 I’ve been busy this week with other work but last weekend I tidied up all the paperwork left from the auction. Artlook is very useful, printing out automatic receipts and lists and balances, so double checking the income was relatively easy. The Trust bank account has now been opened at the Co-op Bank (very helpful and professional), and although the cheque book hasn’t arrived I’ve at least been able to bank the money.

A couple of days ago we had a surveyor inspect the studio and I’m awaiting a report on the soundness of the structure. From that we’ll make a final decision as to what to do with the building in the long term. It’s already clear that treating the dry rot can’t wait much longer, and Chris is keen to sell the building in order to raise much needed money to spend on the house. Dave’s immersion in his work undoubtedly meant that he neglected other things, including his house and studio. But with no studio we’ll have a major storage problem – decisions on these things will be our next step.
Posted by Bob Frith at 18:06 No comments: Links to this post 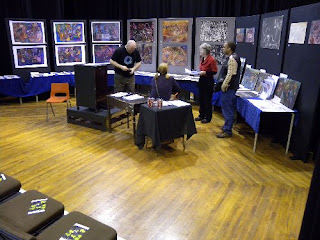 The exhibition has continued to go well – certainly in the sense of visitors, good feedback, and a number of sales. At the weekend Julian and Jackie (of the See Gallery) asked me to bring over some more paintings as it was becoming clear exactly what was arousing most interest from visitors. It paid off; two pieces were sold before they are even got to be hung on the walls. This is part of the purpose of the exhibition - to find out how best to present the work, and what pieces are proving interesting to buyers.

The photograph above is from the auction. It shows, from the left, John (the auctioneer) and Ruth, with Margaret Mytton and Chris Pearson.

Now these events are over (the auction) and under control (the exhibition), we need to look to the next step. The issue of the dry-rot in the studio has not, of course, gone away and we need to think urgently about storage of the work so we that can ask contractors in to deal with the problem. We also need to use the remaining month of the exhibition to widen interest in Dave’s work, attracting other galleries and collectors.
Posted by Bob Frith at 10:58 No comments: Links to this post