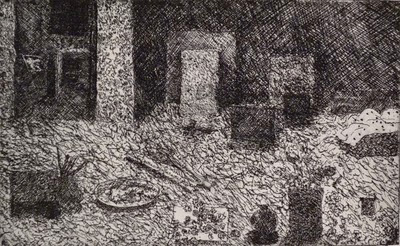 Derek Smith tells me that the filming at MMU went well, and that next weekend he wants to interview Margaret Mytton and myself and after that the filming for the documentary on Dave Pearson will be complete. Today was the final day of the exhibition at the See gallery, and next week I'll take the unsold pieces back to the studio at 54. So almost the end of  another chapter. It would be nice if the Inland Revenue would resolve their issue with death duties - then we could start 2011 knowing where the Trust stands.
This year we're better prepared for the cold weather - the water at the studio has been turned off, and the background heaters are on. Important to avoid another burst, especially as the cellar (that was partly flooded last winter) now houses more work as a result of moving the pieces out of Globe Arts Studios.
Posted by Bob Frith at 18:07 1 comment: Links to this post 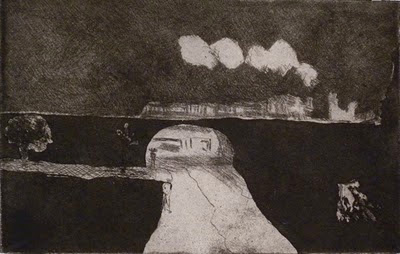 Derek Smith has almost completed the filming for the documentary on Dave Pearson's work. The Trust hope that this film will help us to promote Dave's work more widely and support our aim to enhance the reputation of a unique and special man and artist. Derek has yet to interview Margaret Mytton and myself, but the rest of the filming is just about in place.
One final piece of footage Derek wanted to include in the film is a short section inside Manchester Metropolitan University, where Dave taught for 38 years throughout it's various guises as Manchester School of Art and Design, Manchester Polytechnic, and now MMU. However permission to undertake this has turned into a long, legalistic process. First a facility fee had to be negotiated in order to gain access to the premises (£175 was finally agreed on);  then various other permissions were required. After a lot of negotiation by Derek, and with help from Margaret, herself a  Senior Lecturer at MMU, things finally seemed to be resolved.
But when a final contract was issued to Derek it included a clause  'In addition the Licensee will pay to the Licensor 5% of the profits, only in the event the profits exceed £20,000'.  Despite the fact that we would be very, very surprised if the film made a profit of any kind, let alone in excess of £20K, this does seem a rather mercenary position for the University to take, especially when we're talking of a matter of a few minutes of footage in a 60 minute film created for a not-for-profit organisation. Derek says 'I must confess to never having seen this in all the years I have been producing films professionally since 1979'.
Margaret Mytton has written to the Conference and Events Co-ordinator at MMU pleading for a sensible and balanced response to the Trusts concerns. Among other things, she points out:
"As someone who worked closely alongside Dave Pearson for many years, I appreciate the tremendous commitment he had to the students, the courses he taught on, and to MMU as an institution. This was demonstrated not just by the high quality of his teaching which was legendary, but by the many, many evenings on which, other than students, we would be the only persons in Grosvenor. It seems appropriate that this commitment and 38 years of his life is represented visually in a film about his life and work, without penalty."
She goes on to say....
"I welcome the opportunity for MMU to share in any reflected glory that may ensue as we continue to raise Dave's profile. As we are wishing to portray MMU in the best possible light, this is free advertising for the Manchester School of Art. In fact because of the fee Derek has agreed to pay, MMU are already actually being paid to get free advertising!"

Dave Pearson and the Northern Renaissance 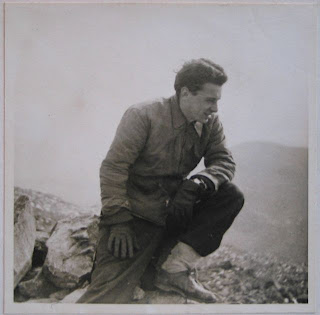 As part of his research for the film on Dave Pearson that the Trust has commissioned, film-maker Derek Smith has been researching Dave's past. Derek came across a Guardian review of an exhibition in 1972 of Dave's work inspired by Van Gogh. Written by the critic Merete Bates, the review says "...unlike so many artists' interpretations after a master, it is not easily forgotten." She finishes by wondering "It will be interesting to see what will grow after Van Gogh. Dave Pearson has great capacity to explore his subject thoroughly."
Derek tracked down Merete, who apparently now paints in Dorset. In a reply to Derek she writes a memory of the period in the 1970s when she worked as a national critic based in the North-West, and refers to the last line of her review:
"It is impressive to go through his work on the web-site and see how he did develop. "The Jarrow March" for example is only too relevant just now. I imagine he was a superb teacher?
"It was an amazing time to work first at Granada and then on the Guardian, especially with a completely free rein that I had then.
"I can remember reviewing/interviewing many artists who may have been helped..(but they were good anyway)...by national exposure.....John Virtue,  John Loker, Tony Cragg, Adrian Henri... Then  Norman Adams,  Peter Prendergast, Jim Billsborough, Kate Barnard nee Westbrook all of whom became great friends, to name a few. These were sometimes alongside artists already well-known - John Hoyland, Alan Davie, Winifred Nicholson, Tony Caro. I would often be covering 3 - 4 exhibitions a week, some with interviews, all well worth seeing. The great advantage of the North, as I have since discovered, is the provision of great galleries even in the smaller towns. Of course there's the Bluecoat....but also the Haworth, the Tib Lane (until recently), the Park Square and the big city galleries such as Leeds, Manchester, the Graves in Sheffield. There is designated space to show painting...
"Of course theatre really exploded then too, sometimes in alliance with television, sometimes independently. At Granada there was World in Action with John Shepherd and Les Woodhead, et al. there were stunning writers like Jim Allen, Jack Rosenthal, Alan Sillitoe... there was the Stables with Trevor Griffiths and others..I myself made documentaries (or at least researched, filmed and wrote them) on the Durham mines, and  the early Labour movement and also wrote a play for Ken Trodd. Then there were the new theatres, the Everyman, the Bolton Octagon, Sheffield Crucible, Leeds Playhouse, the Victoria at Stoke with Peter Cheeseman, the Manchester Exchange...  Not to mention the Art Colleges - Albert Hunt at Bradford and Willy Tirr at Leeds, Jeff Nuttall.....I can't believe, thinking back, how so much could flourish out of nothing in such a short time and it was by no means prosperous, whatever they say - more like emergence from the duress that followed the second world war."
This paints a picture of a kind of Northern Renaissance, a time in retrospect seen as a Golden Age, that I remember quite clearly, although I hadn't seen it in those terms before. To me it's perceptive and very interesting, and it shines yet another light on Dave and his development.
Posted by Bob Frith at 11:30 No comments: Links to this post

Email ThisBlogThis!Share to TwitterShare to FacebookShare to Pinterest
Labels: Merete Bates, The Guardian

Selling - and the Buy Art Fair 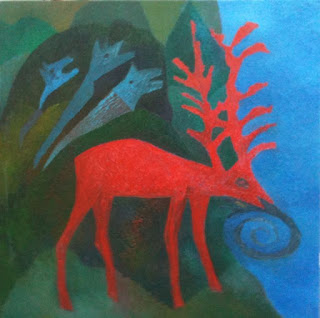 Since the opening of Dave's show at the See Gallery we've sold a number of paintings from visitors to the gallery who were directed on to the studio in Haslingden. Haslingden is about 5 miles from Crawshawbooth, so it's not a long haul to travel on to visit the studio. The Trust are considering formalising this arrangement, so that Julian and Jackie (at the gallery) have a key to the studio and can show and sell work from there as well as  from their gallery.
This has the benefit that Margaret and I, who are often not available because of our other commitments, can rely on there being access to all the work for potential buyers, even when we're busy. For the See gallery it extends their ability to sell, as well enabling them to discuss work with their clients even when they don't have it on show, in the knowledge that they can also market those pieces. It means, however, that we have to have a very well mapped out and developed plan of pricing, pieces that aren't for sale, and work that needs to be set aside for one reason or another.
Yesterday I went to the Buy Art Fair in Manchester, an annual jamboree, this year in Spinningfields, for dealers, galleries, and artists to show and sell their work to the public, who pay a £5.00 entry charge for the privilege. Julian of the See was there, promoting the gallery's work with the Ray Lowry Foundation. Ray died in the same year as Dave Pearson, and also lived (and died) in Rossendale. There, the similarities end, except to say that Ray was a cartoonist and graphic artist of wicked integrity, and with some not insubstantial ability as a painter, mainly of Manchester street scenes.
The experience of the Fair left me dispirited. I couldn't see it as a place to show Dave's work. Too much of a market for second-rate interior furnishings masquerading as art.
Posted by Bob Frith at 20:44 No comments: Links to this post