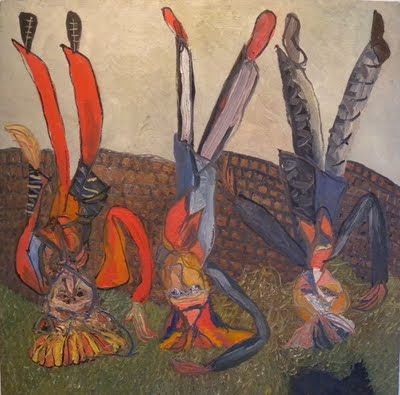 Apologies for another long gap in my posts. It's been holiday time apart from anything else, and as far as the studio goes the builders have been continuing their work on the refurbishment.
The dry-rot has now been treated and where necessary timbers have been replaced. This has involved some parts of the roof, but in the main it's been the entire floor surface of the large ground-floor room, and the first floor room that would (in a normal house) have been designated as the bathroom. Currently re-plastering is being done; to be followed by re-wiring and finally by a complete tidying and treating of all walls, woodwork and ceilings and painting.
The builders, to my relief, have stuck close to their estimated costs, and as the scale of the work and cost has become more apparent I've had the confidence to ask for other small jobs to be taken on that will improve the final look and usefulness of the building.
The plan now, agreed at a Trust meeting last week, is to aim to start moving the work back in November, although in a slower and more controlled way than it left. In mid-December we hope to have a special opening and viewing of the place. We'll use this as an opportunity to raise more funds for the Trust as the bank balance is beginning to dip, but it'll also be an opportunity to celebrate the enormous task that has been undertaken in rescuing both Dave's work and his old studio.
Some work has been on-going in this direction too. Julian of the See Gallery has helped create the first limited edition print of Dave's work - The Wall (at the top of this post), which proved very popular at the See exhibition. This has taken longer than any of us expected, but Julian has insisted we achieved the highest possible quality print and, after many trials, we are only now happy with the result. We are now able to sell this edition of 40 to raise funds for the Trust.
Posted by Bob Frith at 16:18 No comments: Links to this post