Before Ella can entirely complete the cataloguing process in the first room, there remains one folder of work. Ella had some doubts whether the work was by Dave so we had a good look at the contents. The first sheets were pastels and oil pastels by his mother, Lilian, that had been entered for the 'Hackney Annual Art Exhibition', and with gold date stickers for 1982 and 1983.

But further in we came to some unmistakeable Dave Pearson's - not in great condition, it has to be admitted. 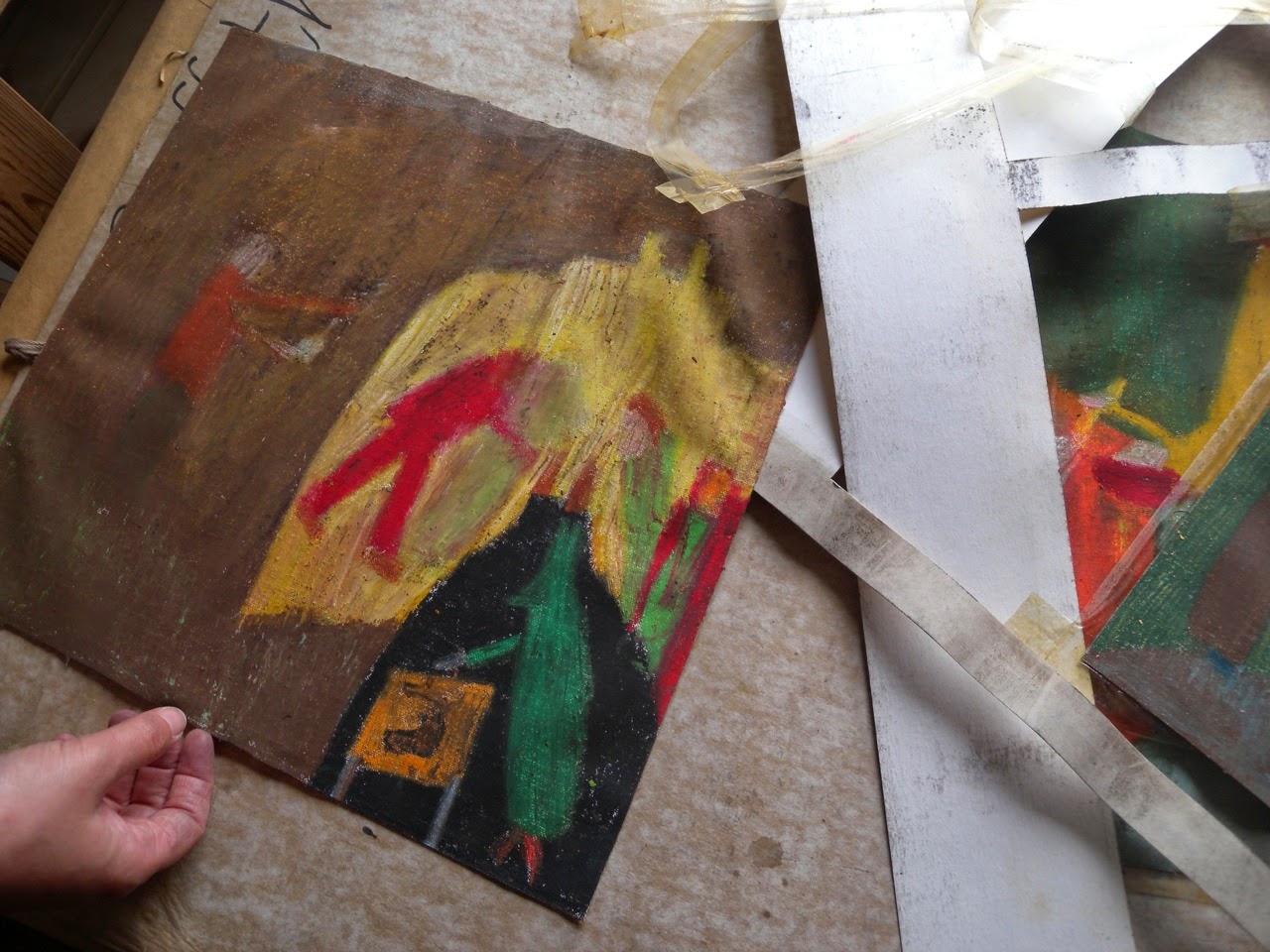 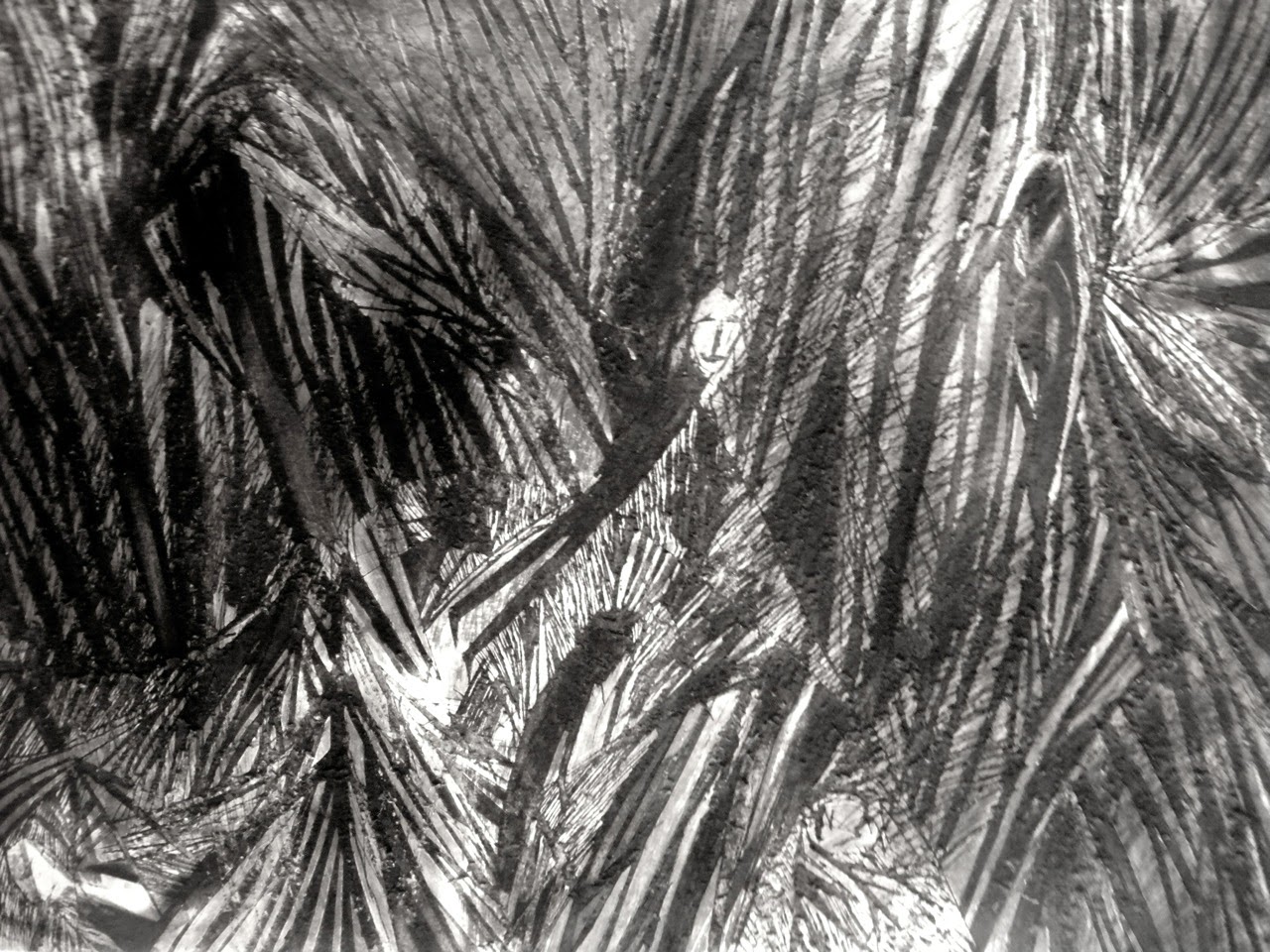 There were half a dozen or so oil pastels on canvas, from the 'Calendar Customs' series, and these needed removing from their deteriorating mounts and will, ultimately, require cleaning. There were also about 15 larger scratched card and black pastel drawings from 'In The Seven Woods', which will need fixing. All of course can now be catalogued.

Probably the nicest pieces were six small coloured drawings, again from 'Calendar Customs'. I'm planning to have these framed - as small paintings by Dave all rare items. 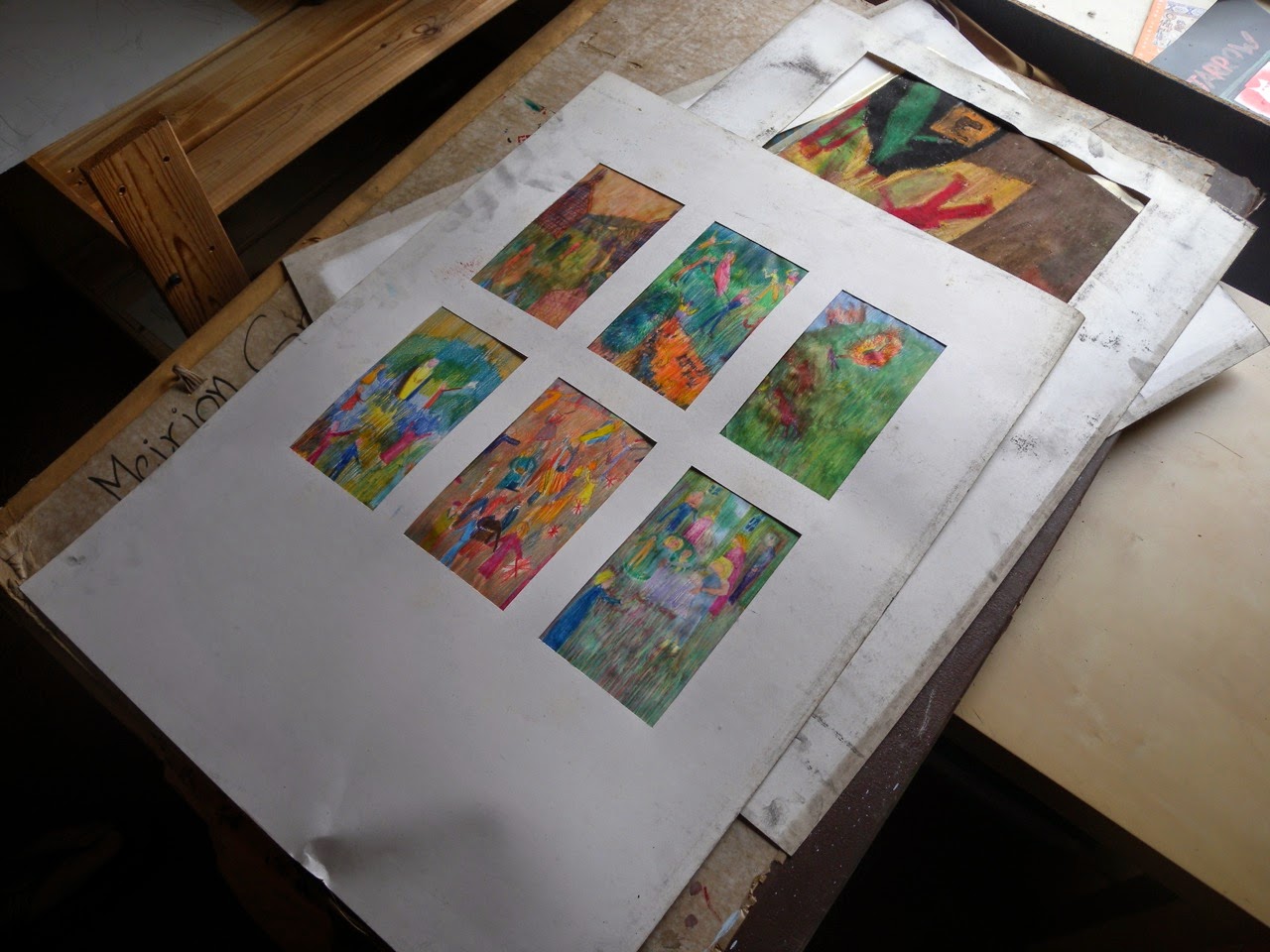 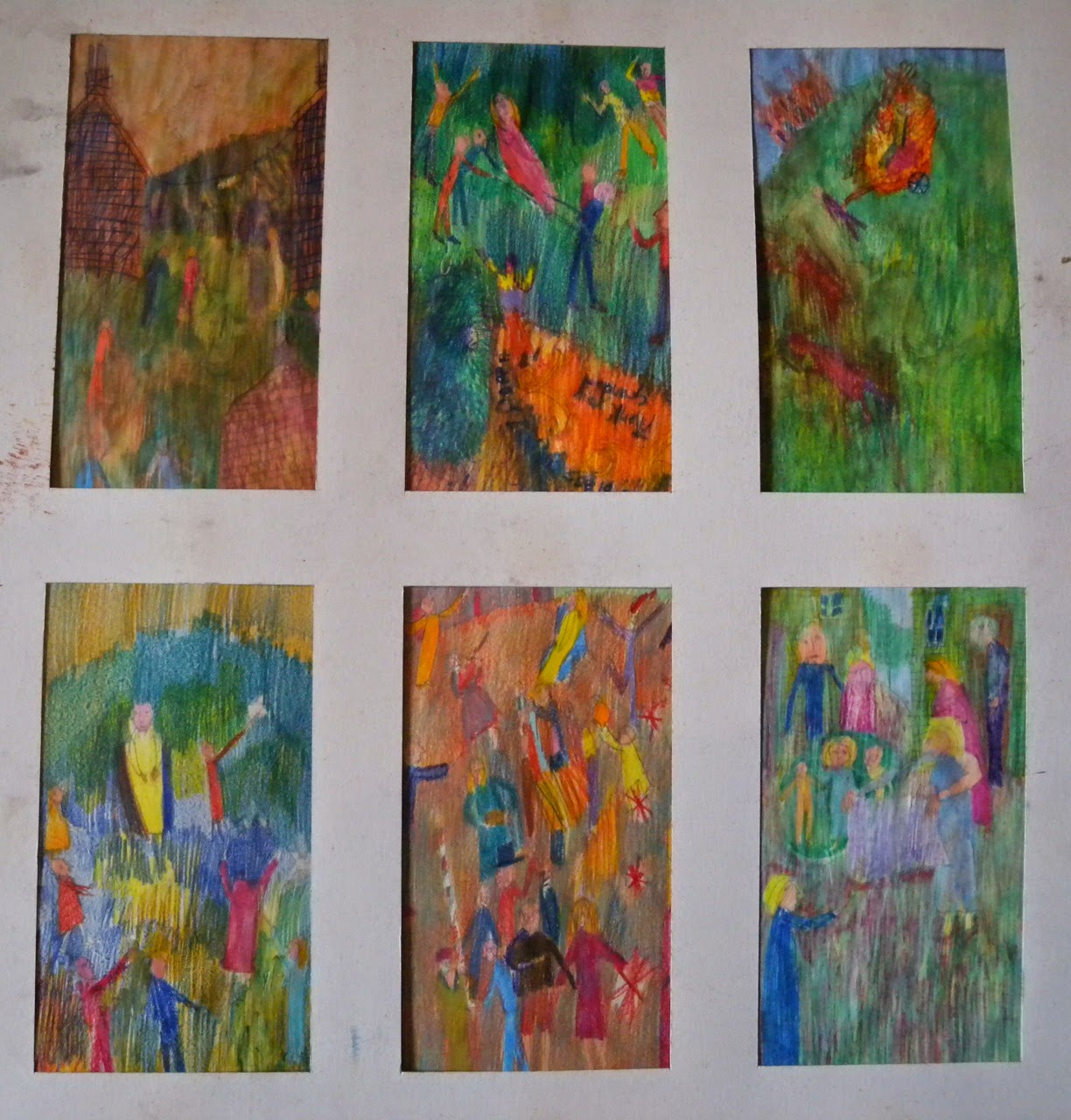 Email ThisBlogThis!Share to TwitterShare to FacebookShare to Pinterest
Labels: British Calendar Customs, In the Seven Woods 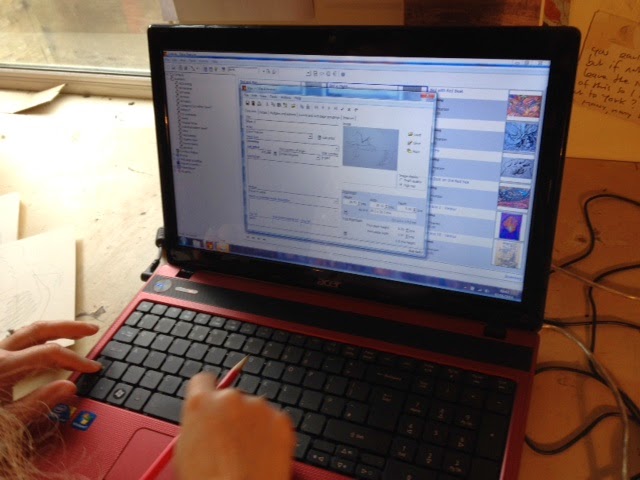 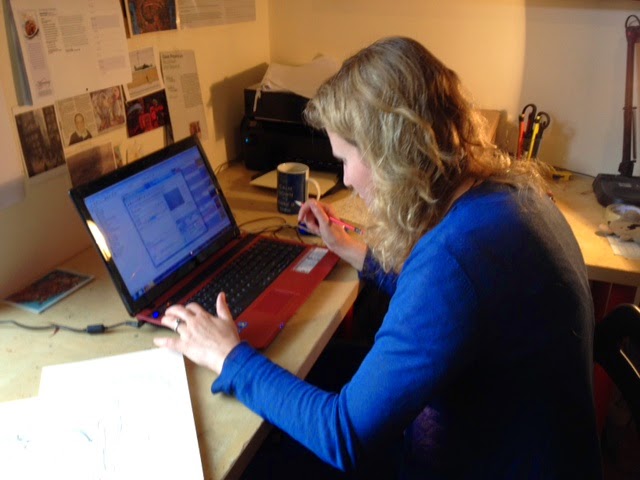 I will have written about the cataloguing process way back; probably 2 or 3 years ago now. So it's probably worth posting a short reminder as to how it actually works.

Ella does a couple of days' work each week, mainly adding to the catalogue. She (as I write) is at catalogue number 6670. When Ella started I had reached around about the 1500 mark, which took me best part of 2 years - but in just under 18 months she has added over 5000 pieces of Dave's work.

What we call 'the Catalogue' is actually a piece of software called 'Artlook'. The company who make it are based in Milton Keynes and if and when something goes awry (which it does once or twice a year) they are available, on the end of the phone or email, for friendly support. It's a very reasonably priced package, and we would certainly recommend it. It's PC-based, which to me is a slight problem as otherwise I work on Macs, but other than that it does everything it claims - and then some.

Ella takes a photograph of each piece of work and enters it into the system. These photographs are fairly low-res and a simple guide to the piece rather than the definitive visual record. The title, media, size, value, date and so on also get entered and the software automatically generates a catalogue number. Ella backs the data up every week.

Artlook software offers all kinds of other cataloguing possibilities - accounting, comments on condition, even an on-line shop if you want one. The catalogue is also very valuable in recording the sales we make of work - including the names and addresses of buyers. In  this way it has helped us create a database of people who are interested in Dave's work. It also enables us to print out invoices, certifications of ownership, and other important paper-work.

However, on the whole, we use only a small proportion of the resources that Artlook has on offer. Even so, we're continually using the catalogue search facilities, and the ability to print off the financial and sales records save a great deal of time and trouble. Finally, being able to view thumbnails of the work by category, and click on these for a bigger image if necessary, is also a highly valuable tool - probably the only way we get to overview Dave's work visually - or at least that part of it (a third?) which, so far, has found its way on to the catalogue.
Posted by Bob Frith at 10:38 No comments: