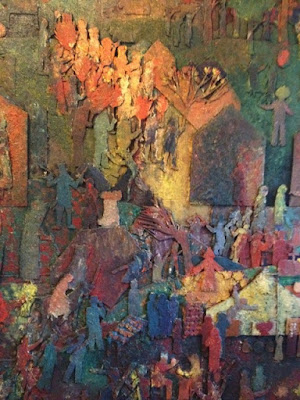 As work winds down for the Christmas break, Margaret and I found time to meet up at the studio on 54 Manchester Road, and welcome two visitors, David Maclagan and Lynne Green, to show them around the studio and look at some of Dave's work.
David I last met 30 years ago, but I've followed his writings in Raw Vision, as he is an artist, writer and lecturer who has a special interest in Outsider Art and art therapy. Lynne, it slowly dawned on me, is the writer of a book about the painter Wilhelmina Barns Graham, and I had a long discussion in the summer with an old friend, Jenny Wilson, who is a Trustee of the Barns Graham Trust, swapping notes on the issues faced by trustees of trusts that hold the legacy of a single artist.
David is currently working on a book about 'automatic' drawing, as part of his work on imaginal psychology. Automatic drawing extends, I suppose, from doodling through to the use of the technique by certain of the Surrealists. He was interested in a number of pieces by Dave Pearson which appear to use a similar technique, and he left with half a dozen such drawings to consider for his book.
Posted by Bob Frith at 11:56 No comments:


Followers of An Artist's Estate will have noticed a long interval since the last post. Apologies - I've been working on getting two Christmas productions on stage; Margaret Mytton has been involved in one of the busiest periods of work on the Foundation Course at MMU, and Julian and Jackie of the See Gallery have been moving house.
Now finally things are beginning to wind down, and Margaret emailed me with very good news which will enable her to take a central role in planning and curating the forthcoming exhibition (in April 2012) of Dave Pearson's work at the Bermondsey Place Gallery. She wrotes "MIRIAD - Manchester Institute for Research and Innovation in Art and Design - has agreed to fund replacement teaching time for me during this period. This will be an absolute life saver in that I'll be able to focus almost entirely on the exhibition and the catalogue. January will also be a very busy time in terms of planning for the exhibition and the catalogue..... What it means is that I will remain Admissions Tutor, most of which work I'm able to fulfil away from college....but I will have a period of leave from early February (excluding the interviews) until May."
From what I heard later the offer will extend to supporting the production of a catalogue for the exhibition, which Margaret will co-curate with Edward Lucie-Smith.
Posted by Bob Frith at 09:23 No comments: