Developments at the Dave Pearson Trust...and an intern. 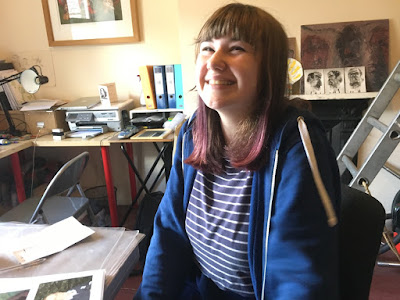 Since the last blog work at the Dave Pearson Studio has developed significantly in several ways. First, the Trust has agreed on a deadline of 31st March 2018 to wind-up itself up. At that point all of the remaining paintings and other art works will be returned to Dave's son Chris (though physically they'll stay at the studio). For more on the reasons behind this read the January 2017 blog. In the short/medium term there won't be too many changes as Bob Frith will continue to oversee things at the studio (Bob is, in any case, the landlord), and he will continue to be helped by Ella Cole. But this change of legal status is clearly a turning point, and in the longer term there's no doubt that the Dave Pearson estate will almost certainly find fresh ways of maintaining Dave's work and developing his reputation.

Next, over the past few weeks we've been joined by Caitlin Stracey (above) who is helping us out for a day or two each week. Caitlin has arrived at a good time, as we're busy reorganising things for a number of reasons  Initially in order to create space for the Apna to have their own office space in addition to our own: 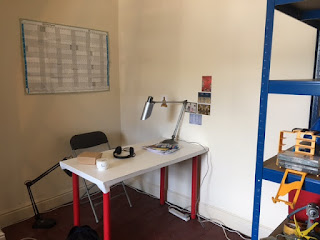 We've also started to archive certain works, mainly sketches and preparatory drawings, so as to create more space in which to show finished pieces. We feel confident to do this because Ella is now very close to completing the cataloguing of the work that we have in the studio. As a result we're better able to take an over-view of all of Dave's work and make decisions on which pieces should be archived, and which should stay visible and shown publicly - both in exhibitions, as well as to potential buyers. 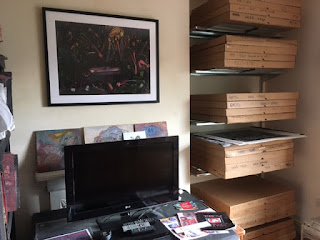 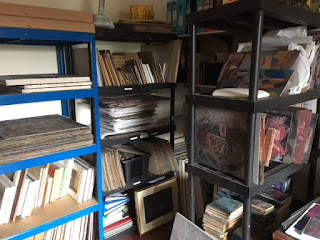 Once the cataloguing at the studio is complete, there's still the little matter for Ella of cataloguing the work that remains at Chris Pearson's house, just along Manchester Road. This could easily amount to another thousand artworks.

Finally, to say that Arry Nessa, who manages Apna (which now occupies the downstairs front room) is in the final stages of doing her own organising - of the On-Paper Festival, which is partly based in our premises. It's good to feel that the building now has a double creative focus, and the Apna room will be used for a wide-range of activities from lantern making to paper-cut workshops and mindfulness.
Posted by Bob Frith at 16:05 No comments: