Expanding - new plans for our building

The process of changing our status from a Trust to a Limited Company (see recent posts) is now underway and in the hands of solicitors and taxation experts.

As a result our focus has correspondingly altered from concern about the legalities as to how we will use the Dave Pearson building and, to an extent, looking at ways of keeping our costs down. We will, of course, continue to house Dave's work, and the process of cataloguing and ordering his output will remain - at least until the process is complete - at the heart of our work. But its also clear that we now have an opportunity to develop the building in more creative directions. 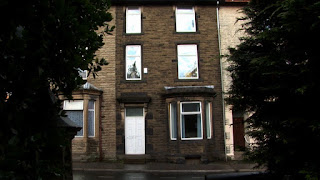 At present, for example, we normally have one public open weekend each year - the annual Rossendale Arts Trail - and perhaps host one or two school visits, and a handful of visits from potential buyers of work or galleries. I've been aware for some time that, with a certain amount of reorganisation, we could also use the space for other activities. In particular I  knew that my friends at Apna, which is 2 minutes walk away in Haslingden centre, were having problems with their own small shop premises, so I asked them if they would consider a move to 54 Manchester Road.

Arry Nessa, who manages Apna, quickly saw the advantages for them - a reduction in rent, a generally warmer and friendlier building, plus becoming part of an existing creative environment. She checked it out with her colleagues, and we showed one or two around - and now the Apna organisation have agreed that they will move into one of the downstairs rooms at 54 by the end of next month.

Work has now started at the Trust so that Apna can soon start holding its classes - yoga, well-being, language and various creative classes and cultural activities mainly for local South Asian women - at The Dave Pearson Centre. 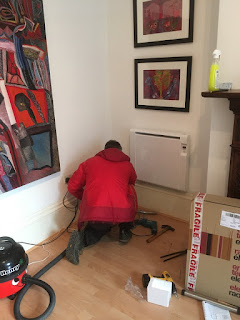 New heaters have already been installed (above), soon to be followed by hot-water and improved storage facilities. A postbox, more security, and a telephone line are being added, and new signs will be hung at the front of the building.

We feel that Dave Pearson would have been delighted to see his old studio sharing its space with a new sister organisation, who will be opening their part of the building to their groups on several days each week. We're also improving the upstairs office so Arry can have desk space. Below Ella is discussing plans with Arry Nessa (seated). All of us are excited that the building will now be used by more people, while continuing to house its amazing collection of Dave's work. 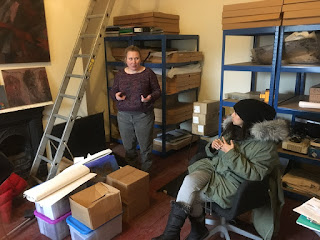 Posted by Bob Frith at 18:48 No comments: Links to this post

The Trust members met together on 4th January to discuss the things we had learned from Amanda Freeman of Myerson Solicitors. Margaret Mytton and I had had a second meeting with Amanda on the 16th December to clarify things still further, and now we needed to talk things over with Chris Pearson.

Since our earlier meeting (see Reassessment - Part 2 below) we had heard from Forbes Dawson, a tax specialist called in by Myerson, and their advice was to close the Trust and set up a Limited Company instead, in order to better manage the affairs of the Dave Pearson Estate.

In fact, a one-off opportunity exists to do this before the 10th anniversary of the Trust. After that the option to undo Trust status no longer exists in law, and the Estate would continue - every 10 years - to have to undergo Estate Duty reassessment. It would mean that, as a result of all the work that I and others have done since Dave's death, there would be a considerable increase in value of the Estate since his death. This would be taxed, and a similar re-assessment - and the accompanying taxation - would have to be done very 10 years.

But by withdrawing the Trust structure, there will be no need for such a reassessment; instead tax will simply be paid on all sales as with any other business, and this can be offset against our expenses (which it can't for a Trust). Further, as a limited company we can pay agents, or directors, to help us sell Dave's work.

So Chris, Margaret and I have agreed to close the Dave Pearson Trust and to establish a new limited company. This will be done over the next 12 months. Chris will be the sole Shareholder, so the terms of Dave's will - that the Estate is left to his son - will continue to be met. 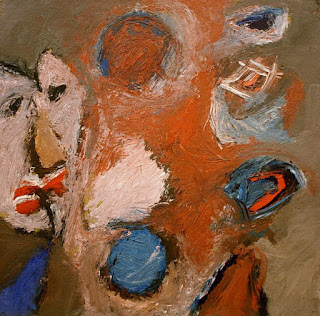 The limited company will need to compensate Directors and Agents in a way that the Trust did not, as Trustees must do any work for free. So increasing sales of Dave's work will become even more important. Not only to keep the studio afloat, the work being catalogued and archived, but now the need to pay some level of fees to anyone helping in this process.

Fortunately we're continuing to make links in this respect, and Ed Perry of the Colourfield Gallery in Poynton visited over the holiday period and has taken away several works by Dave for sale at the Gallery and online (click here to see the Colourfield Gallery page). Ed was very enthusiastic about the link between his gallery and the Trust, and took away some especially strong pieces of work (see picture, above, for a taster).
Posted by Bob Frith at 14:45 No comments: Links to this post